Press hardening - it's our genetic code!

IN HARMONY
WITH SAFETY AND THE ENVIRONMENT

The idea to create a range of various soft to hard properties in a single component using heat treatment as an integral component of a metal forming process was already implemented successfully for the first time by Prof. Dr. Kurt Steinhoff in the 90s in Switzerland using an automobile component.

Based on this knowledge and under his instruction, such a component was first used as a B pillar reinforcement starting in 2006 in the body of a vehicle manufactured in automotive series production.

FUNCTIONAL GRADATION – FROM THE DREAM TO REALITY

For a very long time, the decisive transition into industrial mass production was missing. Based on his first developments in the mid-90s, Professor Steinhoff illustrated how such an approach can be applied to monolithic workpieces made of traditional construction materials if synchronization of the geometric complexity with an equally complex distribution of material properties is achieved in a single component by means of the processing technique.

GETTING STARTED IN LIGHTWEIGHT AUTOMOBILE CONSTRUCTION

After press hardening in the core area of the car body that comprises highly sensitive safety aspects was able to be established based on his substantiated findings, Professor Steinhoff was very interested in using his findings for property gradation that had been tested for years to develop a solution approach for effective lightweight construction on the one hand, and frequently opposing requests for multifaceted crash management on the other.

When the coupling area of the lower B pillar section that connects to the floor assembly threatened to develop into an increasingly critical issue due to the incompatibility of the achievable ultra-high strengths in press hardening and the ductility required for energy absorption here, the solution was evident.

The adjustment of thermomechanically tailored property distribution as an integral part of press hardening.

More than two decades after the first idea, the novel design approach developed into a global megatrend for automobile construction beginning in the 2000s with the manufacture of ultralight and simultaneously extremely safe car body components.

AT THE INTERSECTION BETWEEN RESEARCH AND PRACTICE

Owing to this groundbreaking idea and the unique expertise of Professor Steinhoff and his team, a world-class technological hotspot for press hardening was developed at the University of Kassel in 2005 with the initial establishment of the application center METAKUS. Countless impulses began there and essential developments were made market-ready there for their move into industrial series manufacture. METAKUS is the training ground for numerous experts in press hardening technology.

These priceless resources represent the “genetic code” of METAKUS Automotive with their extensive performance profile in the field of press hardening technology. After more than two decades, Professor Steinhoff is still the mentor, but a number of certified experts ensure continuity and performance capacity that seek their equal on the international level.

IMPROVE YOUR HANDICAP
– WITH EASE

With the sixth generation of its model “Passat”, Volkswagen AG embarked on a remarkable start into an entirely new dimension of lightweight automobile production. The core element of the vehicle architecture was a passenger compartment made of ultra-high strength steel, which fulfilled the highest safety requirements on the one hand, while offering lightweight construction potential that had never been seen before on the other.

Prof. Dr. Rüdiger Weißner was the managing director of the Volkswagen plant in Kassel at the time, and responsible for the implementation of the corresponding production technology, so-called press hardening.

EMBARKING INTO A SAFE FUTURE

This was the first time in the history of car body manufacture that such highly complex geometric and ultra-high strength components were manufactured using press hardening in large series production and were installed into vehicles.

SAFETY FROM THE START

Press hardening technology has essentially been known of since the beginning of the 70s of the last century. Press hardened structural components were first used in car body construction in the mid-80s. However, at this point in time, the main and only goal was to find a solution for the safety requirements for passengers that had risen. The result was to incorporate single reinforcement components having a simple profile-type shape with the main task of increasing the intrusion safety in the case of a side impact. However, these components were anything but light.

STEEL – ANYTHING BUT A HEAVYWEIGHT

Owing to the awareness that the protection of the environment and climate that has grown dramatically since the 90s also and especially requires radical measures regarding individual transportation, demands for efficient lightweight construction for passenger cars have becoming increasingly louder over time. The fact that steel would play a major role, even if a significantly downsized role in terms of its weight, seemed unavoidable due to its economic and technical potential.
The central criterion for lightweight construction was and remains an ideally high intrinsic load capacity induced by the establishment of the highest material strengths.

HEAT – THE KEY TO HIGHEST STRENGTHS

When aiming to achieve such high strengths, the selection of available steels limits itself to those of such qualities that enable it to develop its properties once a specific heat treatment has been applied.

This is precisely the group of steels that press hardening addresses. Here, the key feature is that embedding the shaping in to the temperature-time cycle of hardening not only achieves the highest strengths, but enables exceedingly complex component geometries with comparably low forming forces to be set in one processing step.

The passenger compartment of the Passat built in series with press-hardened components starting in 2004 represents a never before achieved lightweight construction dimension coupled with the highest level of safety.

A MILESTONE IN LIGHTWEIGHT AUTOMOBILE CONSTRUCTION

Professor Weißner has no doubts that the successful implementation of press hardening in large series manufacture at Volkswagen AG would have been unthinkable without the significant innovation and support from Professor Steinhoff and his team. In retrospect, this represents a milestone for future design and manufacture of lightweight structural components for automobile construction.

The seed of today’s METAKUS Automotive was already planted in 2007 when the foundation was laid for the technology center in Kassel that bears the same name. Professor Weißner was the manager of this center for many years after entering into retirement. Here, the essential components of the genetic code of press hardening have been under the scientific direction of Professor Steinhoff for much longer than a decade. 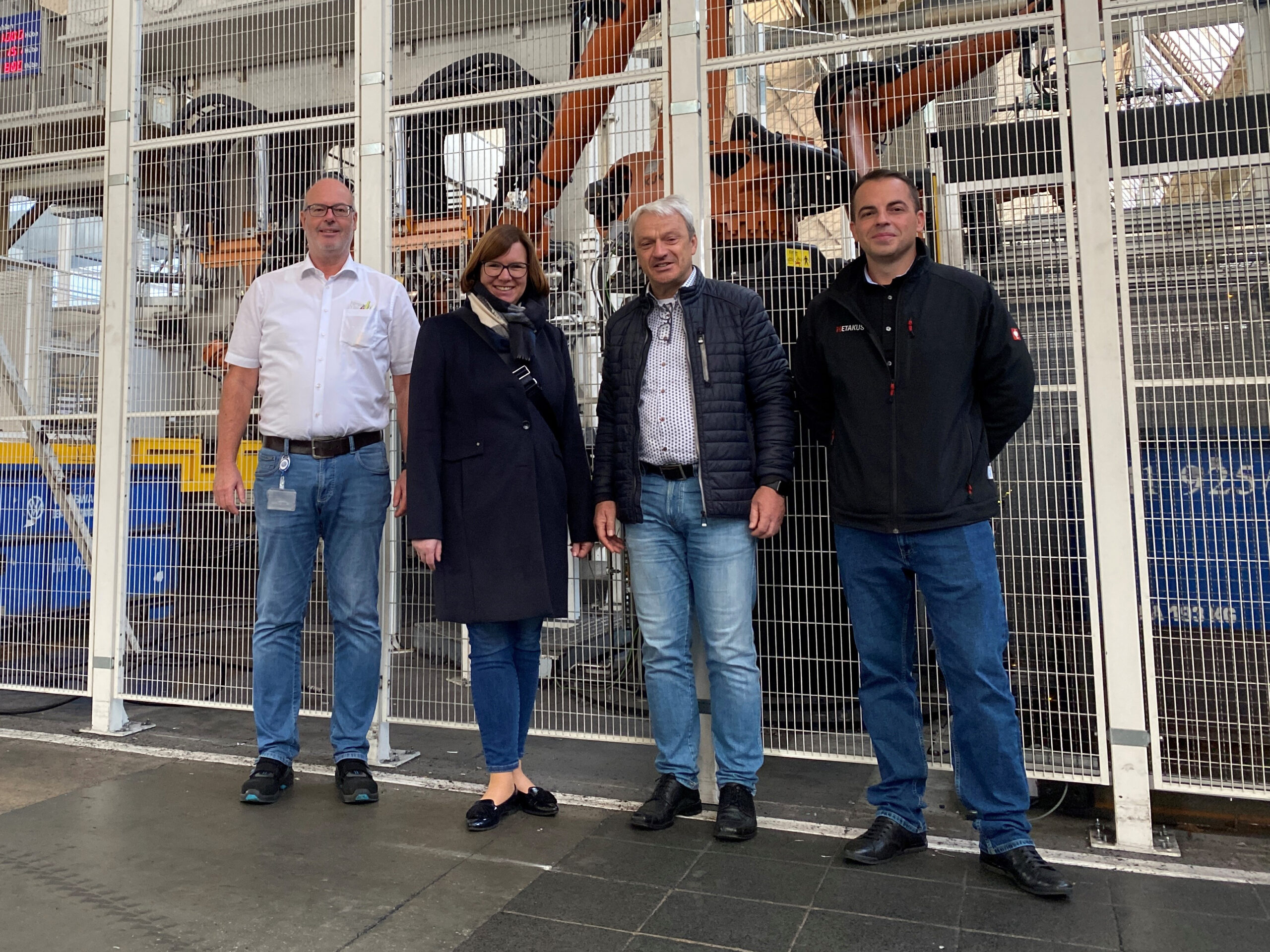 On the occasion of the visit of the mayor of the city of Baunatal, Manuela Strube, and the economic promoter, Klaus-Peter Metz, to the Volkswagen plant in Baunatal, both were able to see for themselves the impressive symbiosis of the manufacturing infrastructure at Volkswagen and the know-how support provided by the specialists at METAKUS Automotive GmbH, which is also located in Baunatal.

The focus was set on the production of hot stamped body components, which are characterized not only by their extremely low weight, but above all by their high crash resistance. The fact that the global breakthrough of this technology began almost 20 years ago right there in Baunatal is more than just a side note.

Fritz-Eckhard Emmeluth, Deputy Production Manager, impressively explained that the world’s largest production site for hot stamped autobody components at the Volkswagen plant in Baunatal, with 12 production lines, would certainly not have succeeded without the expertise of the hot stamping specialists around Agim Ademaj at METAKUS from the very beginning.

All in all, a striking example for the vibrant high-tech network in Baunatal! 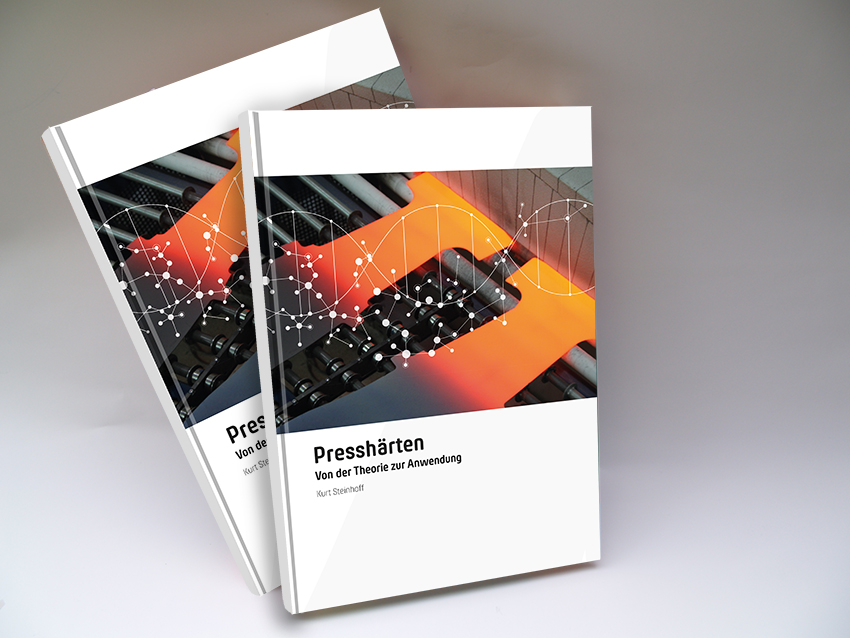 Professor Steinhoff has recently presented his new textbook entitled „Press Hardening – From Theory to Industrial Application“ for use in under- and postgraduate education. 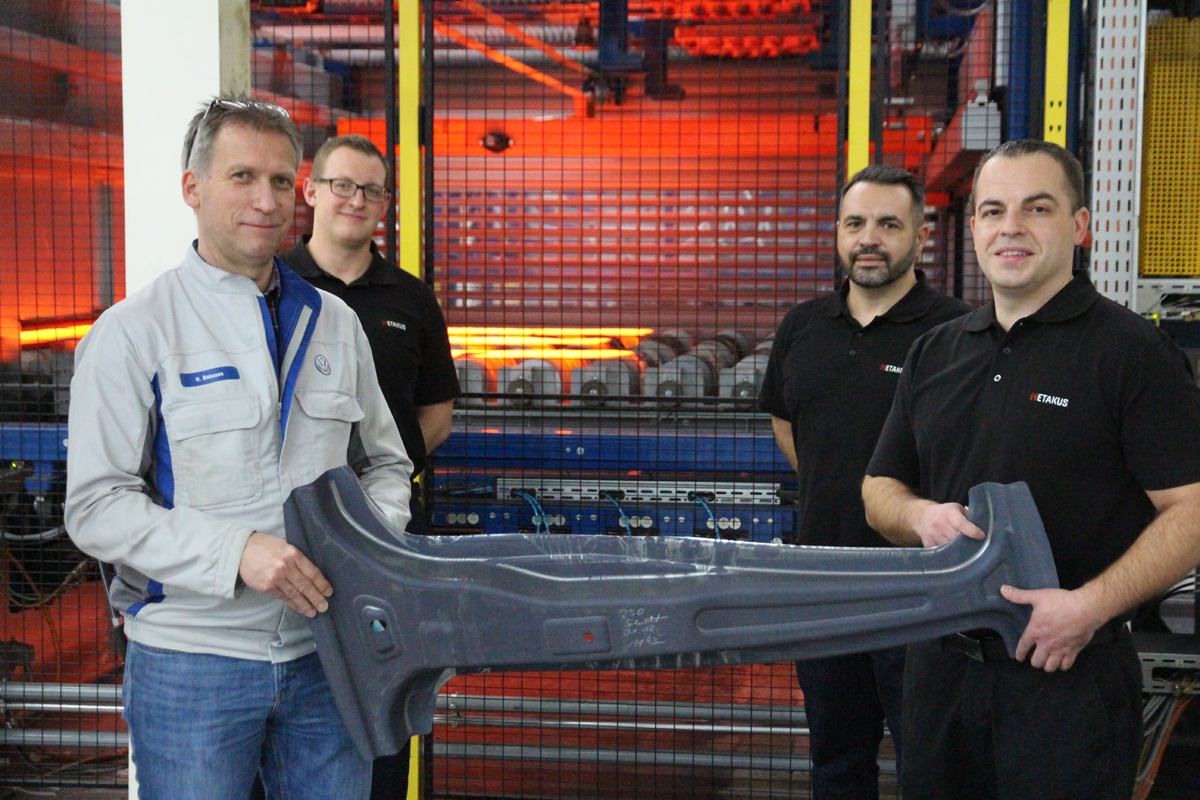 METAKUS Automotive GmbH and Volkswagen AG share a well-established partnership in press hardening technology since more than 1 ½ decades. Actually, without this unique cooperation press hardening would not be what it is today: A global mega trend in automotive light weighting!

Recently the approved team of specialists from both parties successfully implemented a so called Thermal Inline Printer in Volkswagen`s Kassel works. This system incorporates the idea of functionally graded properties for body-in-white components, which was firstly invented and industrially realized by the founders of METAKUS.

Therefore, for Sebastian Barden and Heiko Bahnsen (left on the picture) from the launch team at Volkswagen it was no surprise that based on METAKUS’s first-hand experience and its highly specific expertise, their initially high expectations on this new system with particular regard to production stability, component quality, and cycle time even could be exceeded!